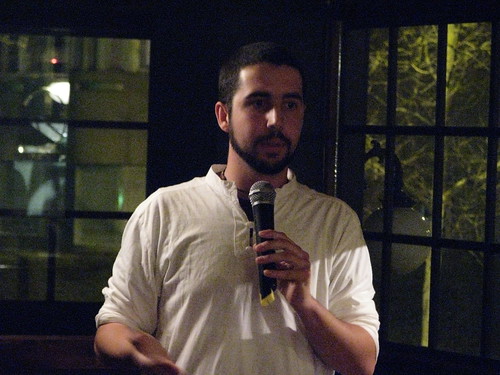 Summary: Last Saturday, the first Skeptics in the Pub event in Spain took place in Madrid. Nearly 60 people attended the meeting to talk about the proposed theme ‘Astrology’. After the 20-minute speech, everyone joined the debate and was soon exchanging points of view of how Astrology was absurdly present in today’s world. As 100% of the audience turned out to be skeptic-minded, the debate followed a consistent path of self-criticism and daring proposals. Before the end, a hobbyist magician performed some well-known Uri Geller’s tricks, later explaining the rather dullness of the underlying technique. The first Skeptics in the Pub in Madrid was considered a total success though some limitations mostly regarding audio problems should be fixed in the future. The Madrid Skeptics in the Pub group plans to hold at least one event bimonthly.

Full review: As we said at the beginning of this year, last Saturday the first Skeptics in the Pub @ Madrid (Spain) took place.
We had previously announced it through the blogosphere, twitter and other social networks and nearly 60 people attended the meeting. The upper floor of the pub (The Clover House) was packed full and you could see that everyone was really enjoying introducing to each other.
We chose “Astrology” as the main theme for this first Skeptics in the Pub and Ismael Pérez Fernández was our guest speaker tonight (and part of the organisation, we should say). As the format goes, he talked about 20 minutes and was then joined by Borja Robert in the moderation of the following debate.
It was in that follow-up that we made an interesting discovery, Pablo Ruiz Múzquiz (part of the organization) promptly asked the audience to raise their hands if they considered themselves to be skeptical about Astrology. A forest of raised arms, immediately followed by a choral laughter, showed that 100% of us were skeptics and so the debate should rather take that into consideration as no woo-woo people were present.

It was a pretty constructive debate with many comments about our “local” problems. As any other country, Spain hosts its own crappy TV shows that promote anti-skepticism or paranormal phenomena as well as the fragile educational system that doesn’t support critical thinking and it’s constantly endangered by bad policies.
The opinions ranged from being belligerent towards co-workers and friends that showed little distaste for Astrology to being just sarcastic as a means to win the battle in the spectators’ heads.
After the open debate, which lasted for an hour and a half, Juan Soler (a prominent member of the Spanish Skeptical Society, ARP-SAPC) gave a short lecture on magical tricks, with a special focus on Uri Geller’s techniques, clearly explaining to us all the key ingredients to fool an audience. We all enjoyed how easily he bent and broke spoons and forks with the sole power of his mind

After the final applause, it was now time to close this first session of Skeptics in the Pub and soon many people went downstairs to pay their bills and leave the pub among a friendly chatter. Half of us, however, decided to have dinner there and so the we continued to talk about skepticism and critical thinking while we ordered some more pints and “tostas”. It was a delicious ending.

We all agreed that it had been a great success. Some minor glitches, however, should be addressed for further sessions, the most important being the purchasing of a small microphone and an portable amplifier so that even the faintest voice could be clearly heard through the pub’s music and the occasional “GOAL!” shoutings below.
We all felt as part of a bigger movement, a global one, and we hope to have helped to it in a refreshing way. It’s now crucial to keep this path and not abandon it. It just needed 5 people, two previous meetings and a lot of mailchatting to organize this but it mightn’t be enough for a long term project as it’s intended. Any help will be greatly appreciated, so please go to http://pub.escepticos.es and leave your comments or suggestions. We plan to hold a Skeptics in the Pub event every month or two, depending on people’s schedules and other limitations.
Finally, we would like to stress the fact that in a world with so many digital interactions and internet highways, José María Mateos (also part of the organisation) came back from TAM London, a “traditional” meeting, with renewed motivation willing to support any project regarding active skepticism. We can still (and should) count on physical encounters and occasional direct talks to be a tremendous force that can help us and push tangible skepticism forward.

Anyway, we had a great time. See you soon!
Please check out our Flickr group!

END_OF_DOCUMENT_TOKEN_TO_BE_REPLACED 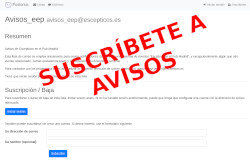 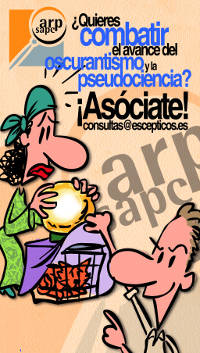